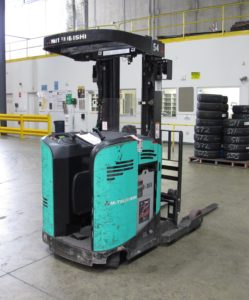 A warehouse worker was using a stand-up forklift to stock inventory in the tire warehouse where he worked. He was driving an unloaded forklift and had just exited an aisle of the warehouse at the dock end of the facility, at which time he believed that he was about to collide with a building support column. He decided to jump from the operator compartment, and in the process of jumping, the worker was unable to jump clear of the collision and was instead caught between the forklift and the column, resulting in crushing injuries. After the incident, proper function of the forklift was at issue.

In the accident investigation of this incident, the expert took various steps to collect relevant facts and information about the forklift and the incident itself:

They conducted a site inspection of the dock area of the warehouse, the stand-up forklift and the column.

They conducted operational tests of the unloaded stand-up forklift, including analysis of drive speed and braking distance.

They reviewed documents including, OSHA 1910.178 Powered Industrial Trucks forklift regulations, the ANSI 56.1 Safety Standard for Low Lift and High Lift Trucks, and manuals for the forklift.

Braking is an important function of any forklift, and proper braking ensures a high level of safety for both the operator and other people working nearby. As such, it is critical to maintain forklift brake systems and too frequently check brake operation. They tested the forklift to assess the stopping distance when being operated at top speed, and it came to a complete stop in less than seven (7) feet. They measured the distance between the end of the aisle and the column that was struck as thirty-eight (38) feet. Additionally, their review of service recommendations and service records showed that the forklift was serviced by an outside vendor at regular intervals, which included operational and brake testing. In fact, service had been performed less than two (2) weeks before the incident, with no problems found. Daily brake checks were also performed by the forklift operators in the warehouse, per the operator’s manual. There was no history of any brake problems or repairs for the forklift.

It was concluded, through their investigation, that the braking system of the forklift was functioning properly at the time of the incident, and that no brake defect or malfunction was causal to the incident. The clear distance of thirty-eight (38) feet between the end of the aisle and the column that was struck gave more than enough space for the forklift operator to maneuver and avoid hitting the column or safely stop before colliding with it, assuming that the forklift operator was following safe and proper driving procedures. The act of jumping from the forklift compartment raised another issue pertaining to the forklift operator, in that proper training dictates that it is safer to ride out a forklift collision than to risk injuries being in a position to be struck by the forklift.